I was born in Harlow, Essex, and after completing my Art Foundation course at Harlow college I moved to Wakefield for three years where I studied Surface Pattern Design at Bretton Hall college of Art (part of Leeds University), which I loved.  I was encouraged to use portraiture in my textile designs as I had such a passion for painting in this style.

After graduating with a First Class honours in 1997 I gained a place at The Royal College of Art, London, where I studied Printed Textiles for two years.  I have worked in design studios ever since.

Along side my textiles career I have worked on a variety of commissioned portraits and other figurative works for exhibitions around London, including the 'BP Portrait Awards' at the National Portrait Gallery, and the Mall Galleries.

I currently live in the East End of London, Tower Hamlets, UK.

9th May - 24th May 2013
'SELF' in 'The Royal Society of Portrait Painters' annual exhibition, the Mall Galleries, 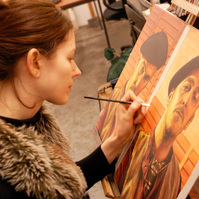